It should be noted that each of these players is not just opinion, they are based on reports given out from people like Todd Archer or Bryan Broaddus that the Cowboys have an interest in these players first. The likelihood that they trade the 17th overall pick for Jamal Adams is almost none. If they trade the pick it would be a trade back to gain more picks, if the player(s) they want is gone.

Obviously, strategies change. Players can get picked higher or lower than expected and that can alter the board. Even if a player falls, teams have these boards set up ahead of time. They know why they fell and if they feel like taking that chance on a player.

In the Cowboys’ case, they own the 17th overall pick in the 2020 NFL Draft. Different players have been mocked to them for months, but soon we’ll have the answer. To give you an idea, these are the five players the Cowboys are reportedly targeting in the first round. 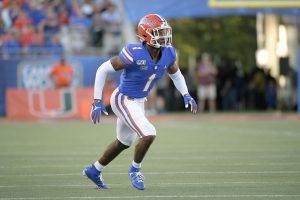 More and more, reports are coming out that C. J. Henderson could potentially be a top-10 pick overall, but make no mistake about it. it’s been reported that if somehow, he’s there at 17, he’s the pick.

The Cowboys’ most pressing need is at cornerback and even though Henderson’s availability where they’re picking is in question.

If he’s there, his name will be on the Commissioner’s card. 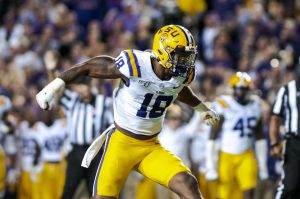 K’Lavon Chaisson has been a favorite for the Cowboys for a while.

With the departure of Robert Quinn, and Aldon Smith and Randy Gregory not yet reinstated, there’s a huge hole at the right defensive end spot across from DeMarcus Lawrence.

Chaisson’s ability to play the run is his best asset, causing 13.5 tackles for loss in 2019, and he was able to draw double teams to free up his teammates to get to the quarterback in the pass rush.

Getting him at 17 overall would be one of the team’s best-case scenarios.

A.J. Terrell has had a sudden surge among draft boards. It’s not uncommon for this to happen, especially the closer we get to the draft, but Terrell hasn’t shown up on many draft experts’ top cornerback lists.

However, as the draft has gotten closer, Terrell’s name has gone from a solid day-2 pick to a potential top-15 player.

He’s got solid length and above-average athleticism which has helped his case as a first-round cornerback, despite his lack of ball-hawking ability.

It’d be odd to add a cornerback not known for creating turnovers after letting Byron Jones walk in free agency, but A.J. Terrell is that same type of defensive back.

Trevon Diggs is a polarizing player.

Teams love his size at 6’2” 210 pounds, as well as his ability to tackle and mirror receivers, but they don’t like that he’s got the tendency to make a play before it develops or get beat on complex routes.

In either case, Diggs has a high upside and if he were the pick at 17, that’s the main reason why.

With the belief that Diggs could thrive under Mike Nolan and find success, this pick would make sense.

This won’t be a popular pick among Cowboys fans given what the team needs, but Kenneth Murray did have a great virtual meeting with Jerry Jones and the coaching staff, in addition to being the top-rated linebacker among some analysts, even above Isaiah Simmons.

Also, it gives an update on the state of their starting trio; whether it means Leighton Vander Esch’s injury is worse than they thought or that it will be Sean Lee’s last season.

Even though Murray doesn’t fill as immediate a need, his speed and ability to cover out in space have caught people’s attention. The assumption is that the team will go secondary or K’Lavon Chaisson with the pick, but if the Cowboys like him that much and are willing to bypass these other players then it should be a testament to his skills and his overall value on defense.