The Dallas Cowboys attempted last offseason to bring in reinforcements on their defensive line. Veterans Gerald McCoy and Dontari Poe were set to be the team's starting 1-tech and 3-tech. With Antwaun Woods, Neville Gallimore, and Trysten Hill behind, it looked to be a solid rotation.

Things didn't materialize that way for the Cowboys. McCoy suffered a ruptured quadriceps muscle in August, and Poe was off the roster by October due to poor play and weight issues. This offseason, the Cowboys brought in veterans Brent Urban and Carlos Watkins to add some depth to the defensive interior. However, the 2021 NFL Draft saw the Cowboys put more resources on the defensive line in the third and sixth rounds with the selections of Osa Odighizuwa and Quinton Bohanna and they bring some promising traits to build on. 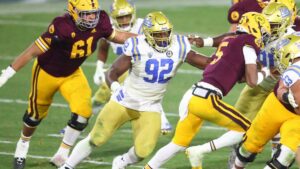 Odighizuwa may be slightly undersized at 6'2 and 280 pounds but he doesn't let that hinder him. During his days at UCLA, Odighizuwa used great leverage and power to be an effective run stopper as evidence by his 27.5 tackles for loss. With an explosive first step, good hands, and an excellent punch, Odighizuwa was able to absorb double teams, which keeps linebackers free to make plays while he penetrates through gaps.

The former Bruin showed some versatility to his game as well. He made plays at the 1-tech and 3-tech. Also, he can slide to the 5-tech in a 3-4 front, which the Cowboys will use under Dan Quinn. With the Cowboys ranking 31st against the run last season, having a player like Odighizuwa who can play several spots on the defensive line, and do so effectively, will keep other players fresh for late-game situations. 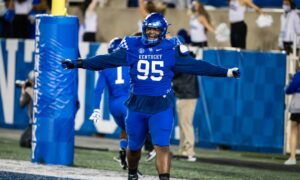 Bohanna is a mountain of a man. The 6'4 and 330-pound behemoth out of Kentucky isn't going to rack up big sack or tackle numbers, but he doesn't have to. Bohanna is a true nose tackle and can do so in a 4-3 or 3-4 defensive. Although he's massive, he explodes off the ball and is a space-eater which will force double teams and allow not only linebackers to roam and make plays (much like Odighizuwa) but give defensive ends more one-on-one opportunities.

His ability to penetrate as a two-gap disrupter can force quarterbacks to move outside the pocket and give edge rushers like DeMarcus Lawrence and Randy Gregory chances to make plays. Also, he moves well down the line of scrimmage and brings down ball carriers from the backside.

Neither player comes without flaws though. Odighizuwa will need to bulk up if he wants to be effective on the pro level as an interior defender. Bohanna will need to maintain his weight (was 30 pounds under his play weight at his Pro Day) and play with a better pad level.

Odighizuwa and Bohanna are raw and talented and have good potential to develop into good rotational pieces on the Cowboy's defensive front.

Matthew Lenixhttps://mlenixsctx.wordpress.com/
I write dope stuff about the Dallas Cowboys and what not.
Previous articleMicah Parsons the Betting Favorite for Defensive Rookie of the Year
Next articleTyron Smith and La’el Collins Back at Practice for the Dallas Cowboys

Off their first victory of the season, the Dallas Cowboys (1-1) look to keep on rolling with momentum in Week Three, as they will...
Read more
Cowboys News

While we've yet to see anyone in a real game this season, there are early signs from training camp, preseason, and other sources of...
Read more

Cowboys have not had a good defense since JJ. Hard to believe anything will change with Jerry in charge