Last week the Dallas Cowboys were seen as underdogs against the Los Angeles Rams despite playing at home; a rare sight for this generally over-hyped team. The Cowboys responded with a major upset and are now seen as the favorites going into Sunday's game in Philadelphia. Could that shift in perception cost Dallas an edge against the Eagles?

The Ringer's Bill Simmons has long preached about the power of the “nobody believes in us” mentality in sports. The belief that you're being taken for granted or discounted can help unify and motivate a team to give maximum effort.

Last week's win over the Rams felt like that kind of effort from the Cowboys. While some extra rest also played a part, Dallas was showing extra energy and determination on both sides of the ball.

Even Vegas didn't believe in the Cowboys last week, but that has shifted now with Sunday's game against the Eagles. According to Sports Betting Dime's odds, Dallas was a home underdog against Los Angeles but is currently favored by 2.5 points headed to Philadelphia.

Being a road favorite is no small thing. It's not a big line, but it's indicative of the renewed consensus faith that is now being shown to the Cowboys.

By that same token, though, it means the Philadelphia Eagles are being doubted just like Dallas was a week ago.

Players and their coaches will use whatever they can find to light that competitive fire. Rest assured that somebody in that Eagles locker room has already pointed out that the visiting Cowboys are favored.

Will that same fire that helped fuel the Cowboys last week now burn them in Philadelphia?

Division games, especially ones with the intense rivalry behind them like the Cowboys and Eagles, are always charged. The stakes of winning the NFC East and making the playoffs will already have both teams pushing themselves hard.

Dallas appears to be the superior team, but so did the Rams a week ago. Could being treated as underdogs  be what pushes the Eagles to get their own upset victory on Sunday?

After the big win against the Rams, expect the Cowboys to come out flat on both sides of the line of scrimmage 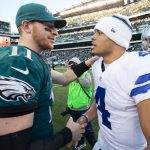 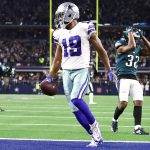