Will NFC East Cause Another Change to NFL Playoff Seeding Rules?

The NFC East is in position to make history in 2020 and not for a good reason. With the real possibility that a team could take the division with a 6-10 record, could this finally force the NFL to rethink its rules about playoff seeding?

We're already going to see a new playoff format this season with the inclusion of a third playoff team. There will now be six games on Wild Card weekend and only the top team from each conference will enjoy a 1st-round bye.

This change will mollify some complaints about a team with a superior record losing a playoff spot to a division winner. But still, 2020 has the potential to keep that debate going if the Cowboys, Eagles, Giants, or Football Team don't go on a late-season hot streak.

Dallas, New York, and Washington would have to win out the final six weeks just to get to 9-7. Philadelphia can get to 9-6-1 at best, but none of these seem likely based on what we've seen from all four teams so far.

Only twice in standard seasons (not counting the 1982 strike-shortened year) have losing teams made the playoffs. The 2010 Seattle Seahakws won their division at 7-9 and the 2014 Carolina Panthers did it at 7-8-1.

Both instances caused discussion about whether or not division winners with losing records deserved automatic playoff bids and/or home games in the 1st round. And if this year's NFC East Champion comes in at six wins or less, that debate is guaranteed to return and be more intense than ever. 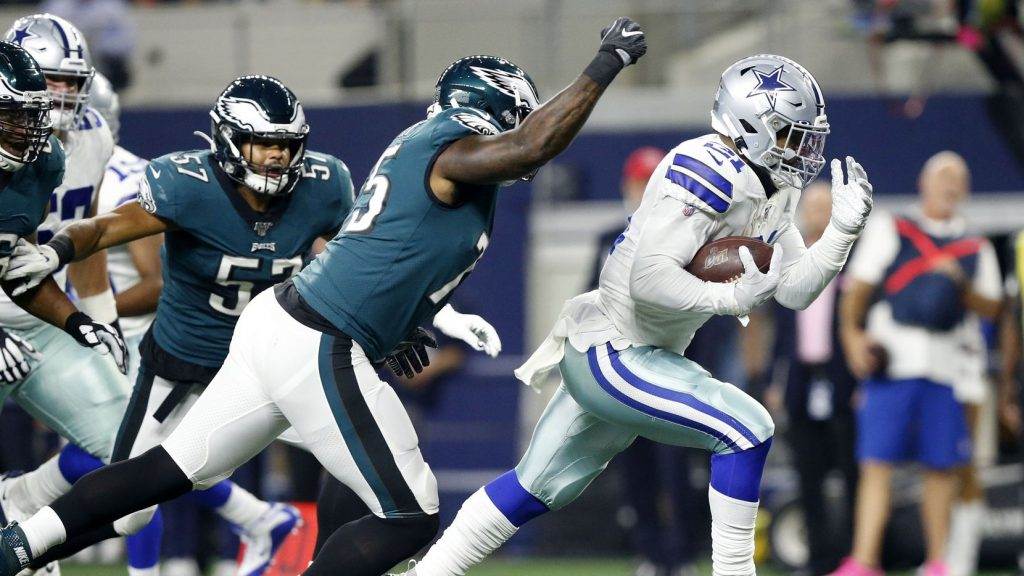 The current NFL standings going into Week 12 have the 5-5 Chicago Bears as the 8th team in the standings; the team who would be denied a playoff spot if the season ended today. If Chicago or whoever finishes 8th in the conference doesn't have a winning record themselves then it might cool the conversation a little.

Still, even if the Bears are only 8-8 that's still better than a potential 6-10 or 7-9 winner from the NFC East. The cause for complaint still exists.

The issue for the NFL is that you can't make division championships irrelevant, otherwise you make divisions and the rivalries within them meaningless. And two of the biggest drivers for interest weekly for the NFL are team rivalries and the high stakes of division games.

An exception I'd consider to this, though, is if the team missing the playoffs had a head-to-head victory over the division winner with a worse record.

For example, the Bears defeated the Giants back in Week 2. If the Giants were to wind up winning the NFC East but had a worse overall record than Chicago, I could see them forfeiting their playoff spot in that scenario (but only if New York actually had a losing record overall).

One far more simple change I think may come from this, and should, is that the division winner is ONLY guaranteed a playoff spot. That's more than enough reward and preserves the integrity of the division system.

Hosting a game in the first round or any round of the playoffs should depend entirely on overall record and subsequent tiebreakers. If two teams have the same overall record then give the nod to a division winner over a wild card team, but otherwise the team that performed better in the regular season should get the home game.

Again, there are still six weeks to go and the final playoff picture is far from clear. Maybe someone form the NFC East will indeed get hot and take this topic off the table.

But based on the current trajectories of all parties involved, I have a feeling we'll be coming back to this discussion with renewed vigor once the 2020 playoffs begin.

Jess Haynie
Cowboys fan since 1992, blogger since 2011. Bringing you the objectivity of an outside perspective with the passion of a die-hard fan. I love to talk to my readers, so please comment on any article and I'll be sure to respond!
Previous article
Former Cowboys S Darren Woodson Named Semifinalist for 2021 Hall of Fame Class
Next article
The Dallas Cowboys Enter Thursday’s Game In Unfamiliar Territory

I think people need to remember, that the NFC East is the only division, that went through three regime changes, during a pandemic, with no OTA’s, or preseason. The Eagles are the only divisional team, that had continuity from the previous seasons. There is no excuse for their struggles. It seems Dallas and Giants are now competing at a high level, with the better teams in the league. So, the answer is no. This season needs to be treated as the anomaly it is. The only way to resolve the losing-record teams, making the playoffs over winning-record teams, is dissolving division play. Incorporate a few more tie-breaker scenarios and make it only conference play. Each team plays 8 teams in their conference and 8 teams in the corresponding conference. Now that there is so much parity in the NFL, it should work its way out evenly.

The NBA changed their playoff format recently based on the same complaints that inferior teams were making the playoffs over superior one’s. I like the fact that the best teams make the playoffs. I think it makes the games
more competitive and rewards teams for having good seasons vs bad one’s

Not sure what type of format change could be implemented in the NFL, but I wouldn’t be opposed to it to a change.

I have been saying this a for long while — yes, the division winner requires some type of reward, and the guaranteed playoff spot is (hold-your-nose) acceptable. As for seeding, division winner wins all ties over wild card teams, but that’s IT — otherwise, the home team is the one with the better record.

I really hope we see a 6-win team win this division this year to get the NFL to open its eyes!

I think there’s a good case to be made as of Dec. 1 that all four NFC East teams have been among the 7 worst teams in the NFL this season. However, that’s a subjective case. Objectively, there’s a regular season scheduling format and playoff format in place, which splits teams into divisions and conferences, and which seeds playoff teams according to the preset format, based upon regular season finishes. All of this is out of practical consideration, since then NFL can’t work things out with a 162-game or 82-game regular season per team, where every team plays every team home-and-away at least once. Adding playoff teams doesn’t address situations like what we’re seeing with the NFC East in 2020 (or the 2010 NFC West and 2014 NFC South), but adjusting the conference playoff seeding format to seed 1-7 without automatically seeding the division winners 1-4 might alleviate some dissatisfaction.

Regarding any complaint that a team like the Bears (5-6) might have about the current state of the NFC playoff picture, where the Bears rank 9th in conference (on the outside trying to get in), while the NFC East leading Giants (4-7) rank 4th in conference (on the inside hoping to stay there) due to the poor state of the NFC East, consider the following. All other things being the same, if the Giants had won all 7 games they lost, or any of the 7 they lost, the Bears would either be worse off than they are now, or no better. The Bears would be 4-7, since one of the Giants’ losses was to the Bears in week 2. The Giants’ week 1 loss to the Steelers (10-0) was non-conference. It only hurt the Giants, and helped no NFC team, above any potential strength-of-schedule or strength-of-victory tie-breaker involving NFC East teams. The Giants lost to the Cowboys (3-8) in week 4 and the Eagles (3-7-1) in week 7, but the Cowboys and Eagles both have worse records than the Giants. The Giants lost to the 49ers (5-6) in week 3, but the Bears currently rank higher than the 49ers in conference, based on a better conference record. So the only Giants losses which have helped NFC teams which currently rank ahead of the Bears in playoff positioning were to the Rams (7-4) in week 4 and Buccaneers (7-5) in week 8. And there’s nothing unfair to the Bears about the Giants losing those games. Aside from the idea that an NFL team can’t depend on help from other teams with respect to regular season and playoff aspirations, if the Giants had won those games alone, everything else the same, the Rams would be 6-5, the Buccaneers would be 6-6, and the Giants would be 6-5, none of which substantially improves the Bears’ playoff picture. The Saints (9-2), Packers (8-3), Seahawks (8-3), Cardinals (6-5), and Vikings (5-6), all ahead of the Bears in conference ranking, are unaffected by the foregoing. So the bottom line is, there isn’t really a valid complaint here from the Bears’ standpoint.