If the Dallas Cowboys have done one thing well in the last decade it would be drafting, particularly in the first round. Vice President of Player Personnel Will McClay has done an amazing job of finding talent in the early rounds, producing an abundance of pro bowlers and all pros since 2010.

Dez Bryant kicked off the decade as the 24th overall pick in the 2010 NFL Draft out of Oklahoma State. By 2012, Bryant started to establish himself as one of the best wide receivers in the NFL when he racked up 92 receptions for 1,382 yards (career-high) and 12 touchdowns. In 2013, he made his first pro bowl after compiling 93 receptions (career-high) for 1,233 yards and 13 touchdowns. By 2014, Bryant put his stamp on the NFL when he produced 88 receptions for 1,320 yards and 16 touchdowns (led NFL, career-high) and was named first-team All-Pro.

This led to Bryant signing a mega five-year 70 million dollar deal with 45 million in guarantees. Unfortunately, that began the downward spiral of his time in Dallas. A broken bone in his foot caused him to missed seven games in 2015. He would never reach 1,000 yards or score more than eight touchdowns in his final three seasons with the Cowboys. In April of 2018, Bryant was released and hasn’t played football since. Even with that being said, Bryant had an amazing eight seasons in Dallas racking up 531 receptions for 7,459 yards and 73 touchdowns (franchise record). 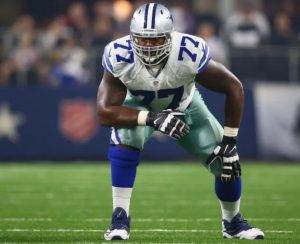 The formation of the Cowboys offensive line began in 2011 when they drafted Tyron Smith out of USC with the 9th overall pick. Smith has built a reputation as one of if not the best-left tackle in the league. He’s been selected to seven consecutive pro bowls (2013-2019). Also, he’s been a first-team All-Pro twice (2014, 2016) and been a second-team All-Pro on multiple occasions (2013, 2015). He’s had the responsibility of protecting the blind side of former quarterback Tony Romo and Dak Prescott, and nobody could’ve done it better than he has. 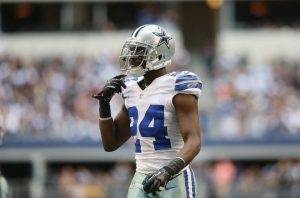 Morris Claiborne was supposed to be another fine first-round selection by the Cowboys in 2012 out of LSU. They traded away their first-round (14th overall) and second-round picks (45th overall) to the then St. Louis Rams to move up and grab Claiborne with the 6th overall pick.

Unfortunately, Claiborne never developed into the player the Cowboys expected him to be. Injuries caused him to miss 23 games from 2013 to 2015. Also, his play on the field was wildly inconsistent. He never made a pro bowl or an all-pro team in his five seasons in Dallas before leaving the organization in 2017. This will definitely be remembered as the biggest first-round failure for the Cowboys over the last decade. 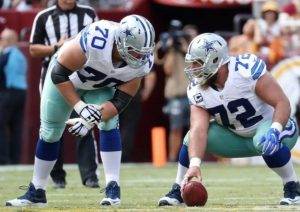 The best way to build a football team is to start in the trenches. In 2013, the Cowboys began to really solidify their offensive line by selecting Travis Frederick 31st overall out of Wisconsin. All he’s done since is establish himself as the best center in the NFL during his seven-year career. He’s been a pro bowler five times (2014-2017, 2019) and been named an all-pro three times from 2014-2016. After missing a year as he recovered from Guillain-Barre Syndrome in 2018, he bounced back in 2019 and re-established himself as the league’s best center.

Zack Martin was selected 14th overall in 2014 out of Notre Dame, and he’s done nothing but dominate since. Martin has been a pro bowler and an all-pro (four first-team selections, two second-team selections) every season he’s been in the league. Also, he’s been extremely durable having made 94 out of a possible 96 starts. Needless to say, these two selections were both home runs to use a baseball analogy. 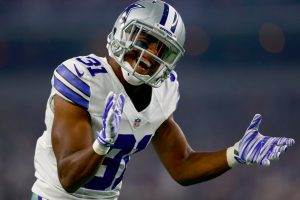 When Byron Jones was selected 27th overall in 2015 out of Connecticut, he was a dual-threat guy having played both the safety and corner positions. For his first three seasons, he was primarily a safety where he never fully found his groove. However, when Kris Richard was brought on as the Defensive Backs Coach and Passing Game Coordinator in 2018, he put Jones permanently at the corner, and he took off. Jones made his first pro bowl and was named second-team all-pro and put his name in the discussion as the best shutdown corner in the NFL. In 2019 he was good once again in a contract year and is set to be an unrestricted free agent. He’ll without question be one of the first names discussed to be brought back in 2020. 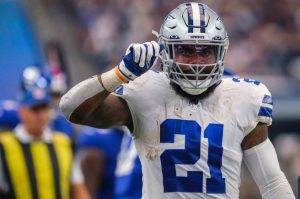 Arguably the best first-round selection by the Cowboys came when they took Ezekiel Elliott 4th overall out of Ohio State in 2016. Elliott took the NFL by storm in his rookie season winning the rushing title with 1,631 yards and scoring 15 rushing touchdowns while being named first-team All-Pro. In 2017, he missed six games due to a suspension for domestic violence allegations, but he was still extremely productive. In 10 games, Elliott rushed for 983 yards and led the league in rushing yards per game (98.3).

Elliott bounced back in 2018 with another excellent season. He won his second rushing title with 1,434 yards and was named second-team All-Pro. This season, after signing a mega six-year 90 million dollar extension with 50 million in guarantees, Elliott was again big-time. He finished fourth in rushing (1,357), tied for fourth in rushing touchdowns (12), second in all-purpose yards (1,777), and tied for first in 100-yard games (7). One thing is for certain, the Cowboys are just fine at running back for the foreseeable future. 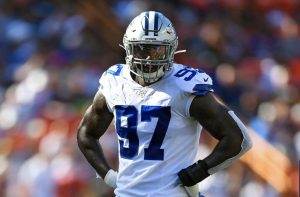 When the Cowboys selected Taco Charlton out of Michigan 28th overall in 2017 it was supposed to beef up their defensive line, but it never came about. In two seasons, Charlton only logged seven starts and a grand total of four sacks. This led to his release in September, and he found a new home with the Miami Dolphins. He was pretty productive in the 10 games he played for Dolphins registering five sacks, one more than he did in two seasons with the Cowboys. However, for whatever reason, it never worked in Dallas. 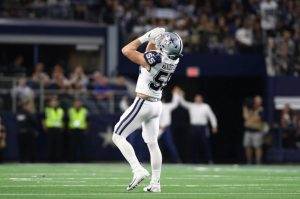 When the Cowboys selected Leighton Vander Esch 19th overall out of Boise State in 2018, it wasn’t exactly received well by the Cowboys fan base, at least not initially. Vander Esch quickly changed the opinion of himself with an amazing rookie campaign. He racked up 140 tackles and was named second-team All-Pro.

This season started out pretty well until the injury bug kicked in. A neck issue that has been diagnosed as spinal stenosis forced him to miss seven games and ended his 2019 season. He had surgery to fix the issue on Tuesday and is expected to be ready when the offseason program begins in the spring. This was another hit by the Cowboys front office. 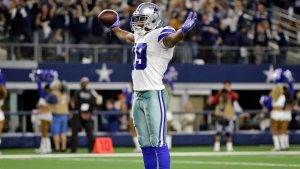 The Cowboys started 3-4 in 2018 and were in desperate need of an offensive spark, and they got just that. They traded their 2019 first-round draft pick to the Oakland Raiders to acquire Wide Receiver Amari Cooper, and the Cowboys took off. Cooper racked up 53 receptions for 725 yards and six touchdowns in nine games. More importantly, the Cowboys went 7-2 and won the NFC East.

This season he was plagued with injuries, ranging from plantar fasciitis to knee problems. However, he was still very productive setting career highs in yards (1,189), touchdowns (8), and yards per catch (15.1). Cooper is set to be an unrestricted free agent in 2020 and has every intention of staying in Dallas long-term, and the Cowboys feel the same way. After Dak Prescott, you can expect Cooper to be the next player to receive a big payday in Dallas.

A decade full of first-round pro bowlers and all-pros have come through the Cowboys facility since 2010. Will they continue that in the next decade starting in April? Only time will tell.