In the game of football their special bonds that form from going to battle with one another week after week, season after season. Those relationships go even beyond the gridiron and into real-life over time.

In 2014, a unique connection began with All-Pro Guard Zack Martin and the newly retired Travis Frederick. When Martin was drafted 16th overall that year by the Dallas Cowboys the first person to reach out was Frederick and the two future stars got to work on locking down the interior of the offensive line.

Their first season together was a successful one as the duo blocked for DeMarco Murray who set the franchise single-season rushing record and led the NFL with 1,845 yards. Quarterback Tony Romo had the best season of his career with 34 touchdowns to just nine interceptions while leading the league in completion percentage (69.9). This coincided with Dez Bryant also having his best season with 88 receptions for 1,320 yards and a league-leading 16 touchdowns. For their efforts, the two men in the middle were both named to the Pro Bowl and made All-Pro (Martin first-team, Frederick second-team).

In 2015, even though the team didn’t enjoy success going 4-12, Martin and Frederick were continued their dominance as a pair. For the second consecutive season, they both made the Pro Bowl and were made second-team All-Pro.

2016 might have been Martin and Frederick’s best season together on the field. Not only did they pave the way for rookies Dak Prescott and Ezekiel Elliott to win Offensive Rookie of the Year and the league rushing title respectively, but they both made the Pro Bowl for the third straight season and were named first-team All-Pros.

2017 was another tough season for the team as they went 9-7 due in large part to Elliott serving a six-game suspension. However, Martin and Frederick kept their reputations as the best at their positions as they made their fourth consecutive Pro Bowl together and Martin received second-team All-Pro honors. 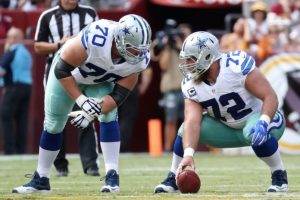 After Frederick missed all of 2018 as he battled Guillian-Barre Syndrome, the duo picked up right where they left off two years prior. For the fifth straight season alongside each other, they made the Pro Bowl and Martin received yet another first-team All-Pro nod.

Playing with someone for that long obviously makes one reflect when the other moves on from the game. After Frederick’s shocking retirement announcement via his personal Twitter account yesterday, Martin gave a very heart-felt and passionate statement about his teammate.

“When I was drafted by the Dallas Cowboys in 2014, Travis was the first person who reached out to me. From that moment on- it has been an honor to call him a teammate and a friend. Over the years, Travis and I have talked plenty about what life after football might look like. However, I guess I never actually thought about the day it would happen to one of us!

It really wasn’t too surprising that two midwestern offensive linemen have an immediate connection. Thanks to Travis, my transition from college to the NFL was a positive one. From helping with technique, offering a fresh perspective of the game, to preparation, the insight and guidance Travis shared was immensely helpful. For the past six years, this type of support and dedication, and his ability to challenge us guys to look at the game in a different way, are just a few of the virtues that made him so successful, both as a player and a leader.

Looking back at our career together, how Travis handled the 2018 season is one of the things that I think might be the most noteworthy. I remember him sitting at breakfast one morning letting us know that it was likely that he wouldn’t be able to play that season. Many people who are out for the season might see it as a time to relax, rehab, and go about your life. Not Travis. He came to every single meeting, walkthrough, Thursday dinner, and game. Always engaged, Travis was continually looking for ways to help our football team. After that season, it was back to business, right into the weight room to prepare for the next season. Although we didn’t achieve the ultimate goal, Travis bounced back, picked up right where he left off, took command of the huddle, and added another pro bowl to his resume.

When thinking about Travis, football is not the only thing that comes to mind. Family and community service are even more important to him. Travis has demonstrated exceptional balance- he is always doing the right thing for the team yet never sacrificing what matters most in life. Not only has he been a great example for everyone who has come through these doors, but also for everyone in our community.

I have learned so much from Travis- both on and off the field. His dedication to the community, drive for excellence on the field, and the love for his family are attributes to emulate. Life after football may be different but his core values will always be the same.

I think I can speak for everyone, but I know I speak for myself when I say, “We will miss 72!” Travis, thank you for an incredible career! And here is to what’s next…”- Zack Martin

Who’s cutting onions? If that doesn’t explain the bond between these two I don’t know what will. This statement was a reminder that the impact of this game goes beyond what happens on Sundays. Lessons, both taught and received, can be helpful in life. Not only has Frederick helped guide the career of Martin, but he’s left him with tools he can take himself and apply to his own life both now and when he has to hang up the cleats.

It was quite the magnificent, albeit short stint in the NFL for Travis Frederick but he took full advantage of it. He was a Pro Bowler every season since his rookie year, a three-time All-Pro and will without question be in the Cowboys Ring of Honor someday, awaiting his former teammate Zack Martin.

Much respect to Travis Frederick on an amazing career and being one of the best drafts picks in team history.