There’s zero time to look back for the Dallas Cowboys with another game just two days away. As the Dallas Cowboys get set to host the Buffalo Bills in their annual Thanksgiving Day tradition, they'll be preparing and playing without the services of Nose Tackle Antwaun Woods.

Woods, who is the Cowboys best interior run defender suffered an MCL sprain in the Cowboys loss to the New England Patriots on Sunday. The Cowboys will have to rely on more Christian Covington and Maliek Collins at the 1-Technique defensive tackle with with Michael Bennett and Trysten Hill filling in at 3-technique when Collins has to slide over to play the nose.

It's a huge loss for a defense that has struggled against the run this season. They were better Sunday but the New England Patriots don't run the ball particularly well.

Up next for the Cowboys on Thursday is one of the best rushing offenses in the NFL in the Buffalo Bills.

The Cowboys absolutely have to have this game against the Bills. They're path to victory will largely depend on how well the stop the Bills' rushing attack. Without Antwaun Woods, that task just became a lot more challenging. 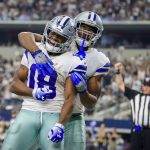 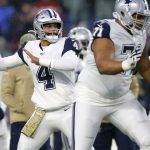