The Dallas Cowboys have some talented names at the linebacker position, but also several red flags. Given future concerns and the need for some insurance in 2018, they could be targeting a linebacker very high in the NFL Draft.

In the best-case scenario, Sean Lee and Jaylon Smith stay healthy and form an explosive combination next year. Damien Wilson, playing on an expiring contract, also maxes out and provides great value. The Cowboys don't have to worry about their thin depth chart because they don't call on those guys too often.

Sean Lee missed five games last year and has a bad history with injuries. While only missing three games from 2015-2016, he missed 15 the two seasons before that.

What's more, Lee turns 32 in July. Even if healthy, Sean may finally start slowing down in his ninth season.

If Lee does start to decline, Dallas is hoping that Jaylon Smith will pick up the slack. After missing his entire rookie season recovering from a major knee injury in college, Jaylon debuted last year to mixed results.

The ultimate victory was that Smith did play in all 16 games for the Cowboys last year. But his missed season, plus delayed rookie struggles, showed in his performance.

Jaylon did improve with time, though, and the hope is that 2018 will be his true breakout. Smith was considered one of the elite talents in the 2016 draft class. If he realizes that potential this year, it will give Dallas one of the best LB duos in the NFL.

If one guy goes down, though, things aren't pretty. Damien Wilson is a solid player but has never shown he can perform on their level. You don't want him playing outside of the base scheme if you can avoid it.

Anthony Hitchens took the team's best insurance policy with him to Kansas City in free agency. The rest of the backups are journeymen like Justin March-Lillard and Joe Thomas, who Dallas just signed this year from Green Bay. These are not guys you want to rely on if you're trying to win a championship.

This is why you've seen guys like Alabama's Rashaan Evans or Georgia's Roquan Smith being mocked to Dallas as high as the first round. At worst, they would compete with Wilson for a spot in the top three and be depth upgrades as rookies, which is especially imperative given the health concerns for Sean and Jaylon.

But beyond 2018, a talented linebacker will be needed soon. Lee's age and contract could make him a cap casualty as soon as next offseason. Wilson's on an expiring deal. And Jaylon may never become the player we hoped for, meaning more talent infusion would be needed.

The Cowboys would be justified to infuse that talent right now. It may be needed sooner than we hope.

If the talent is there, a linebacker would be a worthy use of the first-round pick. 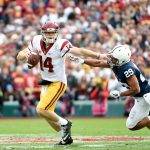 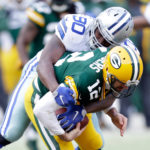