When the Dallas Cowboys lost starting QB Dak Prescott last season, their skill position players foreshadowed the type of offense this year's team has played with backups at both QB and on the offensive line. With Prescott spreading the ball around thanks to great scheming by OC Kellen Moore, the Cowboys have split time between TEs Dalton Schultz and Blake Jarwin almost evenly, using their embarrassment of riches on this side of the ball to keep defenses guessing.

Schultz stepped up in the absence of Jarwin last season, catching 63 passes for 615 yards and four touchdowns. Through four games, Schultz already has three touchdowns and is averaging just over 10 yards per catch.

To say Schultz has replaced Jarwin as the Cowboys starter doesn't tell the full story on how they've used two tight ends to keep a passing threat on the field in run formations. This has opened up space for Ezekiel Elliott and Tony Pollard on the ground, though the Cowboys may favor more power runs against a Giants team that gave up 120 yards on 26 carries to Alvin Kamara and the Saints in their last game.

If the Cowboys run game picks up where it left off against the Panthers – who came into the week four meeting as the league's top rushing defense – there should be opportunities for big plays on the outside. Not only do the Cowboys have a good matchup with WRs Amari Cooper and CeeDee Lamb against James Bradberry and Adoree Jackson, but Moore can take a page from the 20-point win over the Eagles to get his tight ends involved. 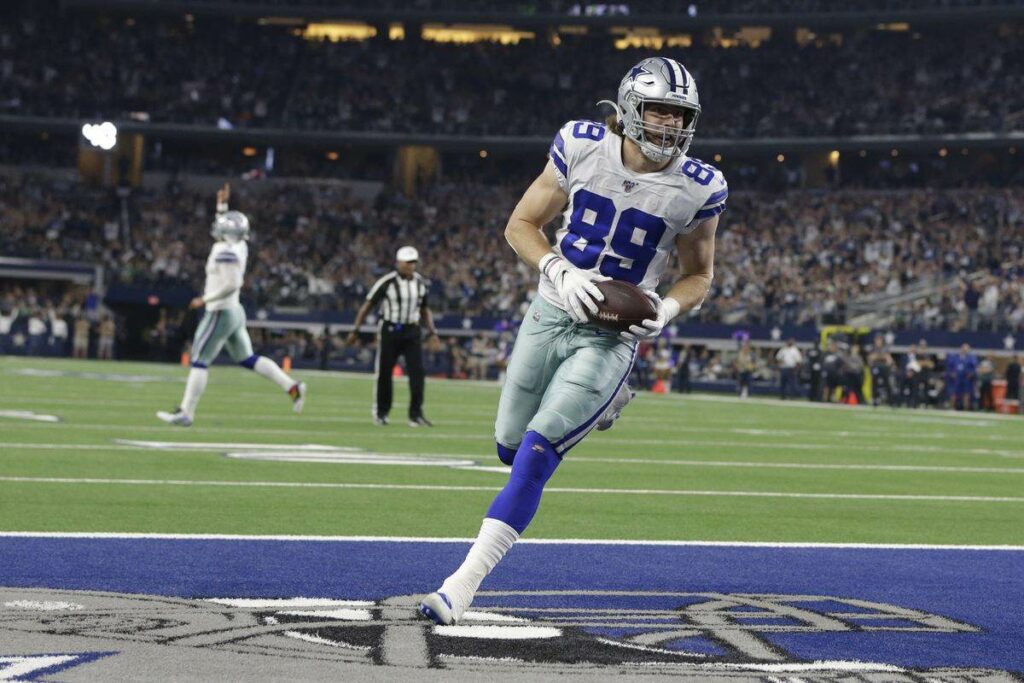 The Cowboys wore out the Eagles linebackers in the pass game to set the tone early in their first NFC East game. Looking at Blake Jarwin's history against the Giants is as good a starting point as any for the Cowboys to add to their division lead doing more of the same on Sunday.

Jarwin has caught a touchdown in every game he's played against the Giants, connecting on three scoring passes with Prescott in a week 17 win at New York in 2018. The Cowboys went into the playoffs that year thinking they had their TE of the future, now seeing Schultz push Jarwin for targets. Jarwin did catch his first touchdown of the season against Carolina, his ninth catch of the year.

It's Jarwin's speed as a seam threat that make him a weapon for Prescott, and exposing the Giants front seven is what the Oklahoma State product has done best. New York lost a starting linebacker two weeks ago in a home loss to the Falcons, when Blake Martinez tore his ACL. Martinez was the Giants' leading tackler, replaced by Reggie Ragland and Tae Crowder – the last pick of the 2020 Draft.

Prescott's average depth of target has dipped this season as the Cowboys are finding more efficient ways to get the ball out of his hands and into their playmakers. This is where Schultz has thrived as a reliable target both in the flat and over the middle. Big plays to Cooper and Lamb have lessened the need for Jarwin to be a vertical threat.

Whether or not that changes this week is up to Moore, with the flexibility of his game plans being one of the biggest reasons the Cowboys are off to a 3-1 start. Long gone are the days of Dallas lining up predictably on offense in hopes of simply beating the man across from them, instead “aggressively taking what the defense gives them”.

Cowboys run-pass balance has varied each week to "aggressively take what the defense gives us," per Kellen Moore.

Is offense still imposing its will?

"Imposing our will is more of a mentality," Dak Prescott told us. "We're going to do it by whichever’s easiest."
(1/2)

If history is any indicator, the Giants defense will give Blake Jarwin a chance to break this game and help the Cowboys establish a gap between themselves and the rest of the division as early as week five. The added redemption for Prescott facing the Giants for the first time since his injury may be all the motivation needed to maintain their 31.5 PPG pace, good for fourth best in the league, against a defense surrendering 23.8 PPG.

The Giants have given up a receiving touchdown to every tight end they've faced this season, including UDFA Juwan Johnson, Ricky Seals-Jones, and Adam Okwuegbunam. While some fans may not be able to separate these names from Blake Jarwin and Dalton Schultz, they may very well have a reason to following FOX's America's Game of the Week with the Giants at AT&T Stadium.

Ole Sergeant Sehultz has been looking pretty good but I wouldn’t mind to give BJ targets to see how well he does! I think both these guys are decent TE’s! Sehultz kinda scares me on how he carries the ball after the catch it’s like if he gets rocked like he did against Carolina he might give up the ball but that’s just me! Up to this point he has played pretty good so I can’t complain!

“I know nothing I know nothing”. Yea I like Sergeant Schutz. Hopefully those fumbles were an aberration. He has a great rapport with Dak, better then he ever had with Jarwin.