The Dallas Cowboys are looking to keep their momentum, and pick up another NFC East win, when they head into Washington later today for a showdown with the Redskins. How will the Week 2 injury reports for both teams impact this rivalry game?

As it stands, health is certainly on the Cowboys. While they had to make an adjustment this week for Tavon Austin's concussion, the Redskins are going to be without more than a couple of their key players today.

Let's dive in to the details, starting with the good guys and the final statuses coming out of last week's practices.

With Austin still recovering from a concussion suffered against the Giants, Dallas called up WR Cedrick Wilson from the practice squad. He should suit up in Washington for PR duties at the least, but will likely have a hard time getting in on offense over Devin Smith.

Gifford remains out with his ankle and that should be the case for at least a few more weeks. However, considering Dallas elected not to place him on IR-Eligible to Return status, they must believe he can get back on the field sooner than that eight-week window would have mandated.

Both Thompson and Wilson returned to practice on Wednesday, albeit at limited capacity, and that makes things interesting for who plays today. A lot of eyes and hopes are on Wilson after his big preseason; will he be active against the Redskins?

With both Chris Covington and Jordan Chunn being released this week, Dallas will probably need one more of their backup safeties in on special teams. I expect we'll see Kavon Frazier active for the game and then whoever is the healthiest between Thompson and Wilson.

You may be surprised, as I was, to see that Colt McCoy is still on the Redskins' 53-man roster. They elected not to place McCoy on IR, even in temporary status, as he is still recovering from the leg injury that ended his 2018 season. Washington may still have hope that the veteran can return and upgrade their QB position, or at least the depth if needed.

After starting in Week 1 and putting Adrian Peterson on the bench, Derrius Guice has now been moved to IR after needing knee surgery to repair meniscus damage. He may still return later this year, but for now it will be Peterson who returns to last year's role as the feature back.

Also out this week is starting TE Jordan Reed, whose horrible history with concussions has resurfaced. One of the most naturally gifted players at his position in the NFL, Reed just can't stay on the field and you have to wonder if he might retire before long with these recurring problems.

A big loss on defense occurred with defensive lineman Jonathan Allen, the Skins' 1st-Round pick in 2017, suffering a knee injury last week in Philadelphia. His backup, Caleb Brantley, was just placed on IR this week as well. That's a big blow to the front seven.

Washington is also banged up the secondary. Starting CB Quinton Dunbar is listed as “Doubtful” after missing practices this week, and backup Fabian Moreau is also battling an injury. That's a scary proposition after what the Cowboys' passing attack accomplished a week ago.

Lastly, we have to mention that Left Tackle Trent Williams remains a holdout after demanding a trade this offseason. There have been conflicting reports as to Williams' reason; some have claimed it's a contract issue and others that he is displeased with the team's medical staff. In either case, the Redskins' have a big problem on the left side of their offensive line without the Pro Bowler's presence.

If Skins are worried about LT, then that means they put a TE there to help out? Can any Boys RDE not including Quinn force the Skins to provide protection help which takes away an offensive receiving weapon from them? 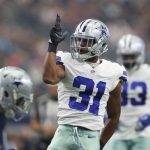 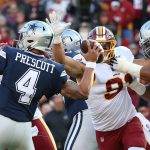