The Dallas Cowboys have put a lot of resources into building their defensive line this offseason. In particular, they've done an excellent job replacing the production of Robert Quinn who had 11.5 sacks in 2019. Not only did they sign former All-Pro Aldon Smith but also Everson Griffen, a highly productive pass rusher in his own right coming off of his fourth Pro Bowl campaign.

Griffen's ties to the Cowboys run deep and he's here for one reason and one reason only, a championship.

“For one it was my favorite football team growing up,” Griffen said earlier this week. “Emmitt Smith, people actually don’t know, I’m named after Everson Walls. He was number 24 here. I think he played safety, linebacker, something like that. But yea I was named after Everson Walls. They’ve always been my favorite team. In this time I’m trying to win a championship. I look at the pieces that they’ve got here with Dak, Coop, Lamb, Mike… so I think that they have the weapons. Zeke, offensive line, all around. So I think the weapons are put in place and it’s up to the players and the coaches to go out there on Sundays and win the games. But on the defensive side, we’re stacked: DLaw, Aldon, me. We’ve got a lot of good guys on that side of the ball. We’re just excited to play football and excited to win. That’s our main objective is to win here.” 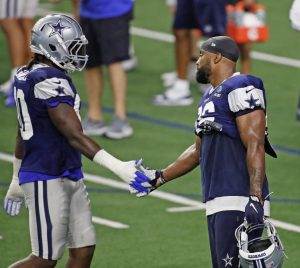 Another link in the chain that connected Griffen to the Cowboys was his relationship with Senior Defensive Assistant George Edwards. From 2014 to 2019 he served as the defensive coordinator for Griffen's former team the Minnesota Vikings. The two talked quite a bit before Griffen signed with the Cowboys.

“We talked a lot,” Griffen said. “He was a decision-maker for me when he told me this is the place you want to be. But the biggest thing is McCarthy's philosophy. His philosophy is work hard during the week and he's going to take care of you. So, with this schedule and what we got going here if players are really honing in on going out there and giving it all you got because he's going to take care of you, I think we're gonna make some big hay this year.” 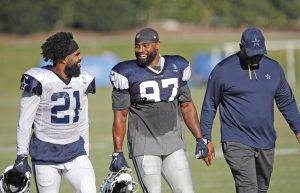 In addition to still being able to make plays at a high-level Griffen has also been very durable. He's started at least 15 games in five of the last six seasons (averaged 9.5 sacks per season over that span). He may not beat you with a lot of speed or bend coming off the edge but his power and excellent technique still make him one of the more effective defensive ends in the league. That skillset along with a highly motivated Smith, and hopefully a soon to be reinstated Randy Gregory, will make the Cowboys pass rush very formidable coming off the right edge to complement DeMarcus Lawrence coming off the left edge.

Matthew Lenixhttps://mlenixsctx.wordpress.com/
I write dope stuff about the Dallas Cowboys and what not.
Previous article
“He’s Worth The Hype:” WR CeeDee Lamb Is Ready For A Monster Rookie Season
Next article
Report: Cowboys CB Jourdan Lewis To Miss Practice This Week

Thanks for clarifying that. Everyone needs to know that he was a ‘great’ CB for the Boys. How many def backs can say they pulled down 57 interceptions in their career? Enough said!

One of the best undrafted CBs of all time. Only CB in NFL HISTORY to lead the league in interceptions 3 times. Very underrated player!