The Dallas Cowboys organization is stacked full of Hall of Fame players. Names like Roger Staubach, Bob Lilly, Emmitt Smith, Michael Irvin, and Team Owner Jerry Jones have had their bronze bust enshrined in Canton, Ohio. On Tuesday, it was announced that another former Cowboys player could be awarded the same honor next summer.

Darren Woodson was one of the key pieces defensively for the Cowboys dynasty in the 1990s that won three Super Bowls in four years (1992, 1993, 1995). According to the Pro Football Hall of Fame, the former Cowboys safety has been named a semifinalist for the 2021 class.

BREAKING: 4 first-year eligible players are among the list of 25 Modern-Era Player Semifinalists for the Class of 2021.

Woodson was drafted in the second round of the 1992 NFL Draft out of Arizona State University. After playing a backup role as a rookie, he became a regular starter in 1993. Woodson would go on the establish himself as one of the best safeties in the NFL making five consecutive Pro Bowls (1994-1998) which included four first-team All-Pro selections (1994-1996, 1998).

In 2002, Woodson received one of the NFL’s highest honors when he was named the Bart Starr Award winner which is given to the player that best exemplifies outstanding character and leadership in the home, on the field, and in the community. When Woodson retired after the 2003 season his 1,350 tackles were a franchise record which still stands to this day. He also recorded 23 interceptions, 17 forced fumbles, 11 sacks, and scored two touchdowns during his 12-year career.

During his retirement press conference, Woodson had this to say about his career with America’s Team.

Woodson left an indelible mark on the Cowboys organization. In 2004, Jerry Jones had nothing but admiration for the team’s all-time leading tackler.

“For 13 years, Woodson was everything you could ask for — unselfish, reliable, dependable, a team player first, and a team leader always. He’s a living, breathing example of the saying that character does matter.”

There’s no bigger honor when it comes to the Cowboys organization than being named to its Ring of Honor. In November of 2015, Woodson became its 21st member. 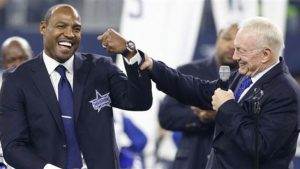 There’s no doubt that Woodson deserves to be enshrined in Canton. Now, only time will tell if that’s enough next August to hear his name called.