What Can We Expect from the Cowboys?

America's Team will open their 2022 NFL season against the Tampa Bay Buccaneers, on September 11th, for Sunday Night Football!

The early lines have already been released and the Dallas Cowboys opened up as -2.5 underdogs to the visiting Bucs. However, since the lines dropped, the boys from Arlington have moved to just 2-point dogs and an OVER/UNDER line of 52.

But are the Dallas Cowboys really primed to be live dogs against a powerful Tampa Bay team that is still loaded and boasts perhaps the best man under center in the history of the game? And is this short line indicative of what we can expect from the Dallas Cowboys in the upcoming season?

Let's have a look at what we already know and what else could happen during the offseason.

This will be Tom Brady’s 23rd, and perhaps final season in the NFL. If you remember, last season, the Bucs and the Boys played on September 9th in Tampa Bay at Raymond James Stadium. The Cowboys were significant dogs, and Brady threw for 379, 4 touchdowns, and two INTs, but Dak Prescott and the Boys kept the game close, darn near stealing a home win from Brady and his Buccaneers, easily getting the backdoor cover.

Although Brady played well, Dak was a beast that day, throwing for more than 400 yards and dropping 3 TDs onto the scoreboards against just one interception. The Cowboys took the game down to the wire, losing by less than a field goal, 29-31.

Is this why we see a 2-point spread again on the NFL game lines at BetOnline.ag? Because if I am 100 percent honest, my gut feeling is that America's Team should probably have opened up on the betting boards at around +3. 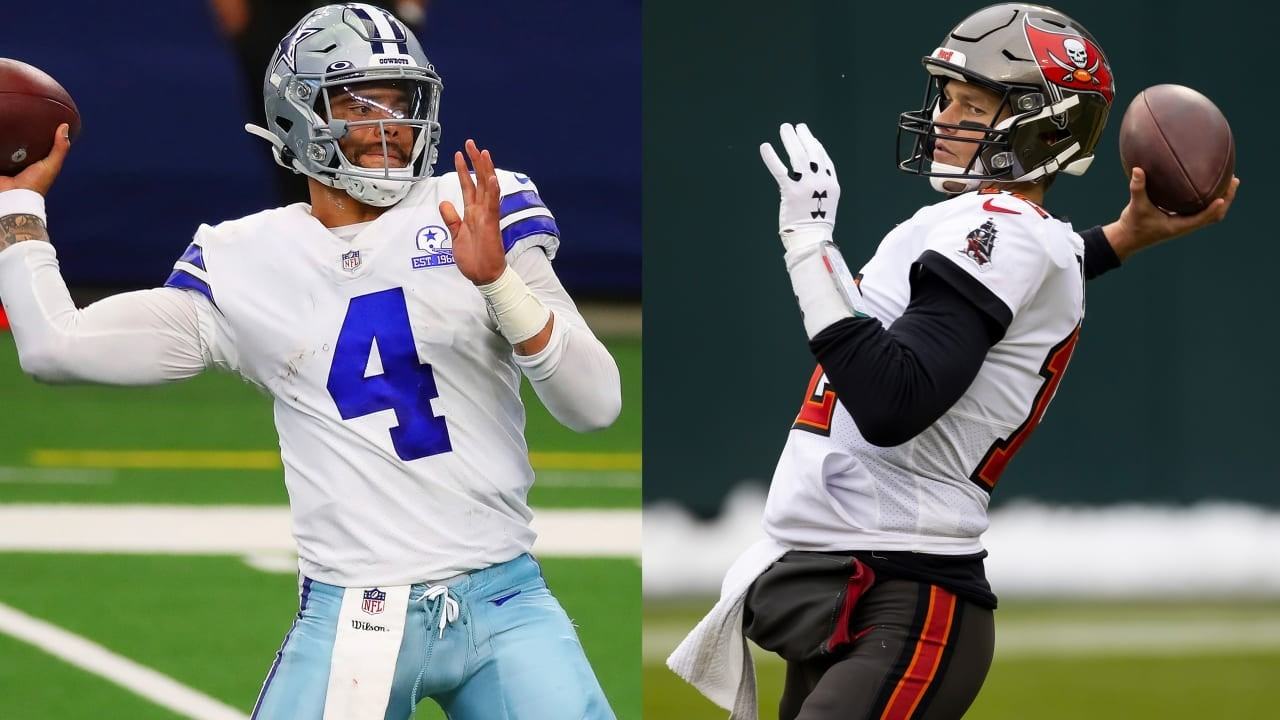 Power Rankings After the Draft and Key Moves

The Cowboys are going to come in near the middle of the power rankings road. Walter Sports has the Cowboys currently sitting at No. 19. However, Draftwire has the Cowboys at No. 15 and NFL.com has the Cowboys falling from No. 12 to No. 13 after Draft Day. At least the experts at the NFL's official website have Dallas on the right side of the halfway point.

I feel like NFL.com is relatively accurate in this case. I cannot say that Dallas has gotten better so far this offseason. The loss of Amari Cooper, La'el Collins, and Connor Williams is painful. And although the Cowboys did get Tyler Smith in the first round, and I do believe this will be a long-term upgrade over Connor Williams, we can't expect it to be an instant upgrade—even after William's stink-bomb of a 2021 season.

There is almost always quite a lot of flux in between each season, but one thing we have seen from Dak Prescott is that his performance tends to fluctuate depending on the squad on the field. He isn't the type of player that carries the team on his shoulders no matter who's on the field. He needs some consistency with his supporting cast, and at this point, the Cowboys seem a bit depleted.

After winning the East, but letting us down in the postseason, we expected that Cowboy's top brass would continue to build on the 2021 team with hopes of going deep into the playoffs in 2022. But management has made a few blunders. The release of La'el Collins at right tackle sits at the front of my mind.

So, they let Collins go, and are set to roll permanently (for the season) with Terence Steele, the same guy who could not adequately cover for Connor Williams when he was slumping. The reason Connor Williams came back off the bench is that his backup, (Steele) wasn't playing well enough to keep Williams riding the pine. So, they release Williams and replace him with a 1st round pick, which does make some sense, but then also get rid of Collins and expect the guy who already proved he couldn't fill the starting role … to fill the starting role. It's some messed-up math.

They also dropped the ball on re-signing Randy Gregory. Make no mistake; the defense will feel this.

Finally, they traded Amari Cooper for a pair of 5th and 6th round picks this year and a 6th round grab in 2022, but they haven't given Dak Prescott any more weapons. Gallup is a good player, but he's been in and out with injuries over the last couple of years, and let's be honest, although Cooper's salary was high, he's the best receiving weapon they had.

How Dallas Fairs in the NFC East

Despite all of this, I still believe the Cowboys have a great chance of repeating with another division title in 2022. The Eagles will make a run at it, but the New York Giants are dead in the water, and the Washington What-ever-they-call-themselves now are at the wrong end of most NFL Power Ranking algorithms.

We should expect a 10-win season—possibly 11—out of Dallas. But unless some miraculous offseason transactions happen in June and July, I don't see the Boys making that deep playoff run we had hoped for at the end of the 2021 season.

Twenty twenty-two should at least be a winning season, and we'll come around full circle, ending where we began. There's a good chance Dallas upsets Tampa Bay in Arlington on September 11th.

Star Staffhttps://InsideTheStar.com/
This is the General Staff account for Inside The Star, a blog for Dallas Cowboys news, scores, schedule, rumors, and analysis. We are the official home for @CowboysNation on Twitter. Follow us today for new content updates straight from our timeline. To learn more about our staff, please visit our Staff listing.
Previous article
How the Dallas Cowboys Can Build a Winning Team
Next article
Predicting 2022 Stats for Cowboys’ Stars

It was Conner McGovern not Steele that filled in for Williams at LG. He’s still a better option than their first round pick who holds more than Williams. Based on Stephen Jones inability to comprehend the salary cap, they had to dump Cooper and Collins. His mismanagement and his father’s diminished mental abilities will mean another mediocre year. They need to promote Will McClay to GM, hire a financial expert to handle the cap and get someone besides Stephen to negotiate contracts. He’s incompetent.

Thank you for pointing that out about McGovern. They also didn’t release Williams, his contract expired and he became a free agent.

We would have beat the Brady Bunch last year, if the refs were not so lop sided in favor of the Bucs winning. Remember the dude, removing his helmet in the middle of the field, automatic 15 yd penalty, not called,
And the blatant PI non call, near the end of the game?
How about the refs forgetting to turn off his microphone, and everyone hears them saying, ” we can’t do that to tommy” what a farce.