Even with Dez Bryant's release and Jason Witten's retirement, the loss of Travis Frederick last season may have been the most damaging to the Dallas Cowboys. The team looks forward to getting their All-Pro center back in 2019 while also having a reliable backup still under contract.

Just within the last few weeks, Frederick has provided encouraging updates on his status for next year. It looks like he'll be able to participate in all offseason activities, but the Cowboys would settle for Week One. There appears to be plenty of cushion for that to happen.

Travis' absence in 2018 was seen in various ways. Dak Prescott was sacked 56 times, second-most in all the league, after just 32 and 25 times the previous two seasons. Part of that is missing Frederick's blocking ability, but also the way he would assist with reading the defense and making pre-snap adjustments.

Dallas would've loved having Frederick out there to help Guard Connor Williams, who worked with Travis throughout the offseason only to lose him in late August. It was not an easy way for the rookie to start his career.

We also saw issues in the run game. Even while Ezekiel Elliott led the NFL in rushing, short-yardage situations weren't as easy as they used to be. The Rams were able to neutralize the Cowboys' rushing attack in Dallas' playoff loss, something that Frederick might have helped overcome.

This isn't saying that Joe Looney did a bad job. On the contrary, Looney was more than adequate and helped keep Dallas from suffering far greater damage without Frederick.

After Joe's work in 2018, Dallas won't blink at keeping him on the $1 million salary he's due next year. It's a bargain for a backup of his quality, and especially given his versatility as an option at guard as well.

Not only are Frederick and Looney locked in for 2019, but Dallas also still has backup Adam Redmond under contract through next season. He was added after final cuts last year to be Looney's backup and should return to at least help the team through July and August.

With these guys already in place, there's no reason to think that Dallas will give much attention to the center position during the offseason.

At most, a mid-round draft pick might be used on a player who could potentially replace Looney in 2020 as the backup. Joe's contract ends next season, and he could be competitive for starting jobs with other teams at that point.

With lots of other concerns throughout the roster, Dallas is fortunate to have so much security at center. All signs are positive on Travis Frederick's return, and that is a huge boost to the team as it looks to push forward from last year's playoff run. 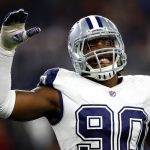 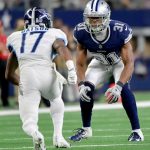