The Dallas Cowboys' safeties may have the been the team's most-talked-about position during the 2019 offseason. Dallas declined making a splashy free agent signing, or even a high draft pick, and that means safety is still a hot topic headed into this year's training camp.

Fans hoping for an Earl Thomas signing or a Juan Thornhill drafting have had to settle for veteran George Iloka and 6th-round rookie Donovan Wilson. These new arrivals don't bring the sizzle that many wanted, but they do add intrigue to the battle for roster spots and depth chart positioning.

A big reason the Cowboys didn't spend big at safety is Xavier Woods, who is a rising star on defense entering just his third season. Dallas' strategy appears centered around Woods' development, hoping he will anchor the position and make everyone look better.

Woods' fellow starter could be Iloka or the returning Jeff Heath. It is assumed that these two veterans will battle it out for the strong safety job, with the loser being a versatile and experienced backup.

Heath has the advantage of experience with the Cowboys but Iloka has more starting experience overall with 79 games to just 41 for Jeff. You also have to think that Defensive Backs Coach Kris Richard had a hand in selecting Iloka from the free agent pool, likely coveting his 6'4″ size.

Even if Iloka does win the starting job Heath should remain a valued reserve and special teams leader. His $2.95 million cap hit for 2019 isn't that high for someone who fills those roles.

Regardless of starting jobs, we expect all three of those players to make the roster. It's below them where actual roster spots are on the line.

After three years at backup safety, Kavon Frazier is facing some real competition for his job in 2019. Not only is there the aforementioned rookie Donovan Wilson, but reserve Darian Thompson may already be moving ahead of Frazier on the depth chart.

Thompson was a 3rd-round pick of the Giants in 2016, the same year that Dallas drafted Frazier in the 6th round. He was named a starter in Week 2 as a rookie, but got hurt that game and missed the rest of they ear. He started all 16 games in 2017, but then was injured again and released prior to the start of the 2018 season.

After less than a week on the Cardinals' practice squad, Thompson got signed to the Cowboys' roster last October as a reserve. They re-signed him this offseason, and reports from mini-camps and OTAs had Darian getting second-team reps in practice over Kavon Frazier and other prospects.

If Thompson has ascended, the biggest concern for Frazier and Donovan Wilson is just how many safeties the Cowboys keep. They've kept five before but could easily go with just four, and that might leave two talented players out in the cold.

If Frazier and Wilson do wind up battling for that fifth and final spot, the rookie may have the edge thanks to youth and his four-year contract. Kavon is a free agent next year, so Dallas might elect to keep the younger, cheaper option for further development.

From starting jobs to just keeping The Star on their helmets, these safeties have a lot to fight for in 2019. It's been one of our most interesting positions to watch all offseason, and that won't change when we head into training camp. 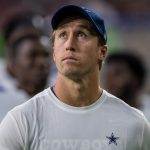 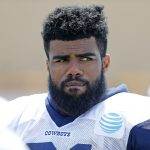