An “extremely disappointed” Jerry Jones addressed the media following the Cowboys latest untimely playoff exit, mentioning the urgency a team must have when their roster is as talented as this year’s Cowboys were. In Jones’ own words, the NFL is designed for parity, with players and coaches leaving the best teams in the offseason to turn around new franchises.

This time has come and gone for the Cowboys offensive line, once widely considered the league’s best. Their failure to realize this sooner is also the reason their 2021 season came to an end on Sunday, at the hands of a dominant San Francisco 49ers defensive front. 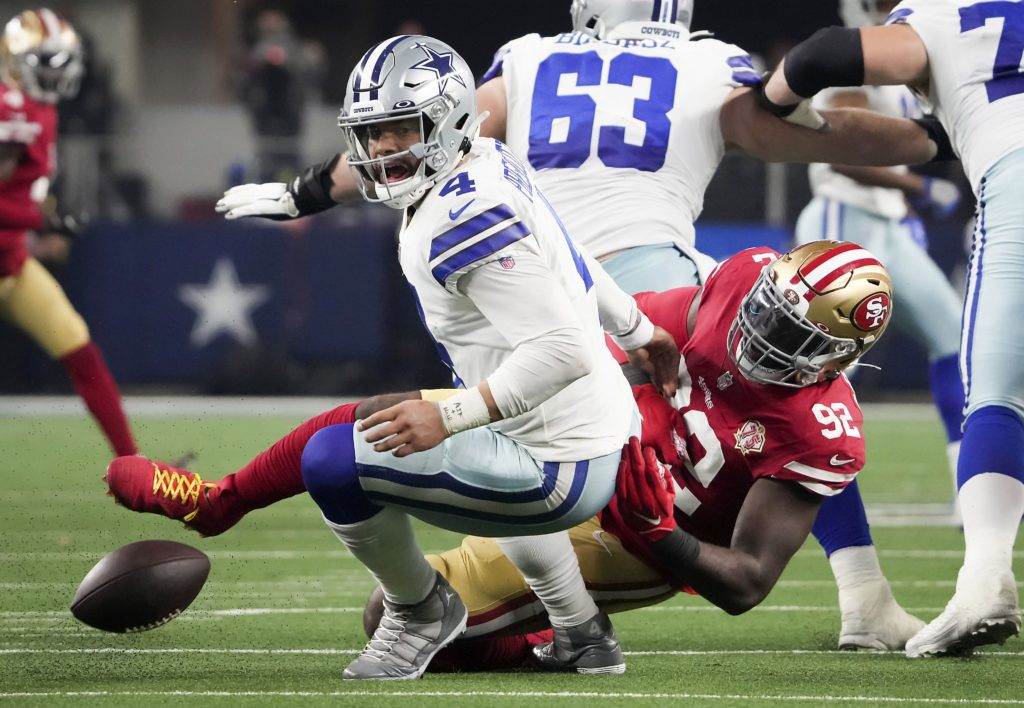 Whether it was the amount of time the Cowboys gave their previous HC Jason Garrett before hiring the suddenly-under-fire Mike McCarthy, or their insistence on sticking with an injured RB Ezekiel Elliott this season, Dallas has not been ahead of the curve in admitting to mistakes and making the rapid adjustments that winning teams do. McCarthy was hired on the premise that a franchise quarterback, offensive line (influenced largely by Garrett), and coordinator were all in place.

One embarrassing home loss to the 49ers later, two of these three premises are in major doubt. The same Cowboys fans that championed Kellen Moore for a HC opening early in the year are now begging for another franchise to hand the keys to Moore. The truth is, the Cowboys knew there would be growing pains with Moore as a young and inexperienced OC, and created a weakness at the hardest position to scheme around – offensive line.

Tyron Smith, Connor Williams, Tyler Biadasz, Zack Martin, and La’el Collins started the Wild Card game for Dallas. It was one of seven different alignments the Cowboys played with this season. Smith, Martin, and Collins all missed time to injury this season while Williams was benched for Connor McGovern. Putting Williams back in the lineup was supposed to be for his upside, and Moore’s confidence in overcoming his frequent penalties. A Williams holding call erased a 32-yard catch by CeeDee Lamb in the first quarter and a false start led to a punt in the third.

Even the cornerstone player of this entire offense, seven-time All Pro Zack Martin, admitted this unit did not live up to standards all season.

The next time Martin is eligible to take a snap for the Cowboys, he’ll be 31 years old. The same goes for Tyron Smith, who hasn’t played a a full regular season since 2015. Neither future Hall of Fame linemen have any playoff success with the Cowboys to speak of. 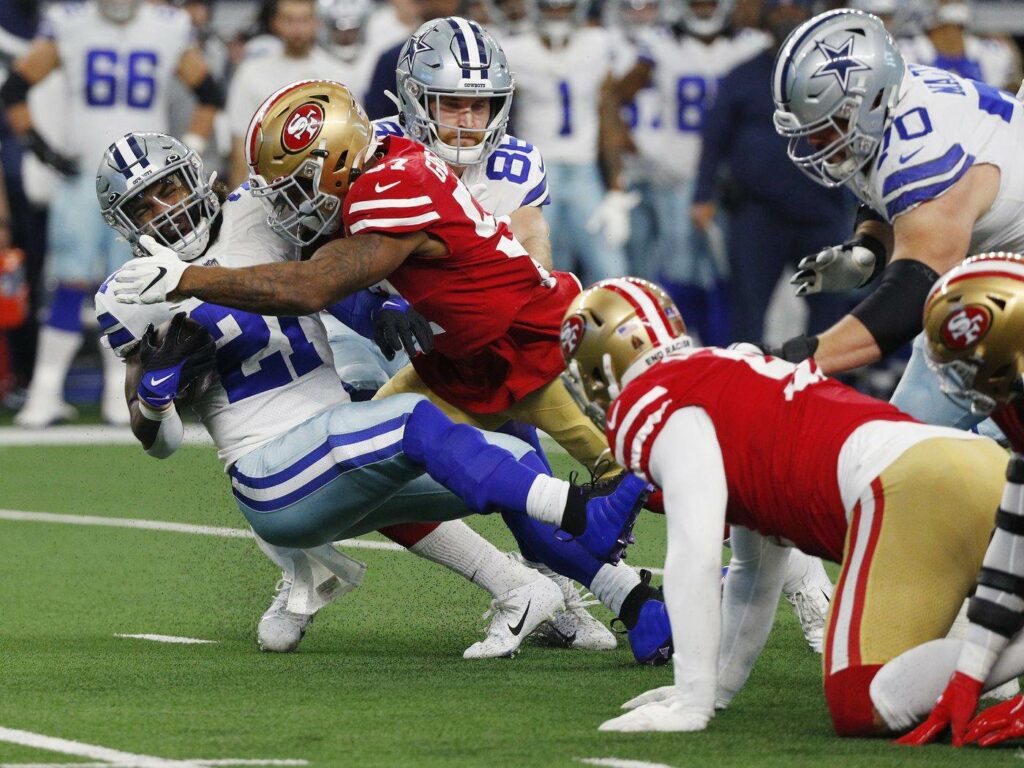 Now, the same Cowboys front office that was praised for building this 12-win roster is tasked with improving an offensive line in need of serious help. Regularly using high draft picks here is how the Cowboys ended up with lack of depth elsewhere on the roster. At the cost of a depleted OL, the Cowboys have depth now, but still face a cap space crunch with the money invested in their starters.

Williams along with backup tackles Ty Nsekhe and Mitch Hyatt will hit free agency in March.

Not even 24 hours after this loss, Stephen Jones told 105.3 The Fan that the team isn’t likely to make big splashes again in free agency this offseason. This tired, repetitive line from the organization leaves only one way to improve any position group – drafting plug and play starters.

Offensive line is one of the best positions for rookie starters to find success, especially if taking advantage of the years Martin, Smith, and Collins have left to develop. The long-term concern in Dallas shouldn’t be that the line play won’t improve. It’s the way they go about protecting the franchise QB they’ve already committed to, in a timely enough fashion to not be depleted elsewhere. 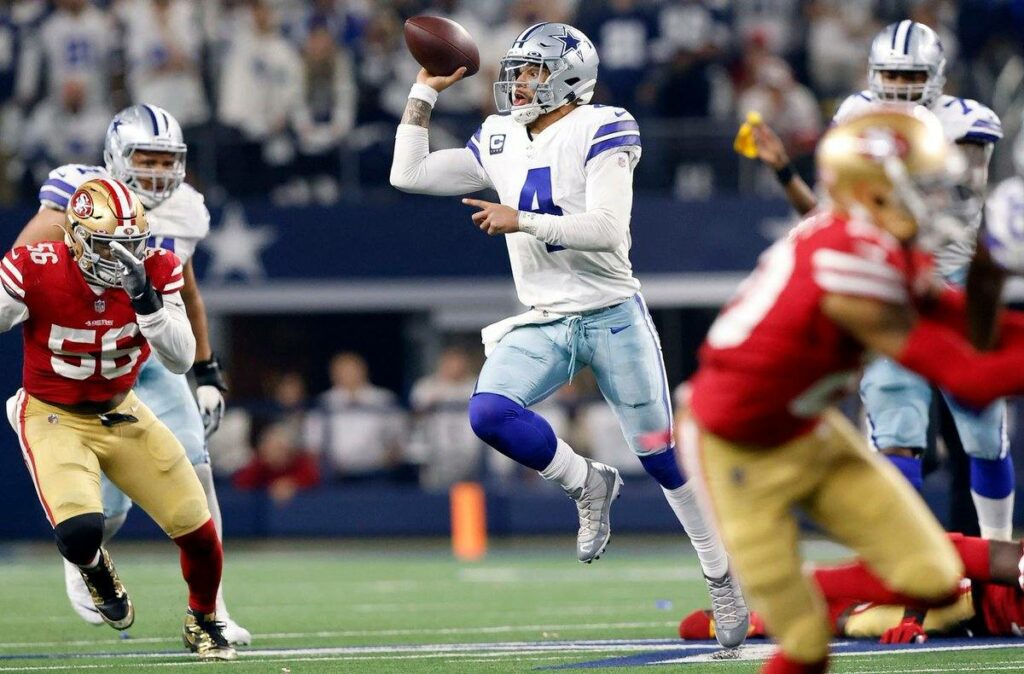 The 49ers came into this matchup with a very specific game plan needed to upset the Cowboys. Their defensive front needed to mask a secondary that had little business holding Lamb to one catch and Amari Cooper to six for 64 yards. They also had to take the Cowboys out of their run game, which Moore assisted in by only giving Tony Pollard six touches.

Playoff games aren’t won on reputation, and the Cowboys realized this on Sunday when their once star-studded offensive line gave them little chance to put up the points they did previously this season. Only the Eagles, Rams, Jaguars, and Falcons scored less than 17 on the 49ers this season. The Eagles joined the Cowboys in losing their Wild Card matchup this weekend.

If those 40 and 50 point performances from Moore and the Cowboys offense felt like a distant memory before kickoff at AT&T Stadium, this long offseason ahead will erase them entirely and challenge the Cowboys to make improvements on the offensive line before next season.

Tell us what you think about “Full Circle: Cowboys Offensive Line Has Become Biggest Problem on Offense” in the comments below. You can also email me at Sean.Martin@InsideTheStar.com, or Tweet to me at @SeanMartinNFL!